Parallel testing means splitting all build tests (categorizing tests) into groups and running each group as a build job on a separate VM. It does not assume running tests on several cores of a multi-core CPU.

In this section we’ll describe two ways of running tests in parallel:

The number of concurrent jobs is defined per account. For example, if you run 2 builds with 4 jobs each (8 jobs in total) when your plan allows 4 parallel jobs, then 4 of those jobs will run at the same time. When a job from project A finishes then the first job of project B will start. This behavior is illustrated below:

.NET unit-testing frameworks allow for assigning categories to a test. By specifying which categories we’d like to run for each job one can drastically reduce the overall build time. The diagram below illustrates the idea:

To assign a category to Visual Studio test apply the TestCategory attribute to a testing method:

The NUnit testing framework has a Category attribute that can be assigned to both test fixtures and test methods. To apply category to a test fixture:

To apply category to a test method:

xUnit has a multi-purpose Trait attribute for applying various meta-data to tests. To assign category to an xUnit test:

Add parallel testing groups on the Tests tab of project settings. For example, a project with the following configuration will have builds with 2 jobs each running tests of category A and B respectively: 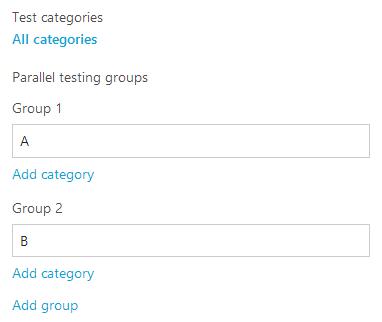 The configuration above will produce two jobs:

By setting groups of environment variables you can split tests using your own convention or algorithm.

For example, using the fact that the Test assemblies field on the Tests tab supports substitution of environment variables, we could split tests by assemblies.

On the Environment tab, add two groups of variables with test_assembly (you can use any name) in each:

Then on the Tests tab specify which assemblies to test using the environment variable:

The same configuration in appveyor.yml:

If tests cannot be categorized by either categories or assemblies you can use environment variables to trigger internal logic of your tests. This could be anything from the names of directories with input data to a range of values to test for.

For example, to specify a range of numbers for each job we can have the following configuration:

Did you know that you can edit this page on GitHub and send us a Pull Request?